Rule No. 50: SHIPMENTS ACCEPTABLE ONLY UNDER PRESCRIBED CONDITIONS Shipments described in this rule will only be accepted for carriage subject to the following conditions:

Live animals or certain types which are not restricted by any government regulation or law and are of a size adaptable to carriage, will be transported, provided advance arrangements have been made with the Carrier. The Carrier will not be responsible for mortality due to natural causes. Such animals will be transported provided that:

1.     They require no attention in transit;

2.     They are securely and properly crated in container(s), or are separated by stalls or other suitable devices acceptable to the Carrier;

3.     There has been satisfactory compliance with all laws, ordinances or other government rules and regulations governing the transportation of such animals.

The following will be accepted by the Carrier only under the conditions:

1.     Baby chicks, baby turkeys and ducklings, provided delivery at destination can be made within 72 hours after hatching. To avoid suffocation, the container(s) should be shipped either as individual pieces or if tied together, the container(s) must have separators between them.

Sporting firearms, namely; pistols, shotguns, rifles and trapline guns; may be accepted for carriage between points in the United States, subject to advance notification to Carrier. NOTE: Shipment of these and other firearms may at times be accepted for carriage to certain destinations, subject to Shipper’s application direct to the Carrier, and Carrier’s confirmation that the specific shipment, routing and destination will be permissible. Carrier will not transport consignments of firearms unless all bullets, shells and cartridges are removed.

Shipments of perishables which are liable to deteriorate or perish due to changes in climate, temperature, altitude or other ordinary exposure, or because of length of time in transit, will be accepted without responsibility on the part of Carrier for loss or damage due to such deterioration or perishability subject to Rule No. 110 paragraph H  and the following:

1.     Advance arrangements have been made with the Carrier;

Shipments will be accepted by Carrier with charges either prepaid or to be collected at destination, except that Carrier may decline to transport the following on a charges collect basis.

1.     Shipments to persons restrained of their liberty;

2.     Packages or pieces of unusual shape

3.     Weight exceeding that qualified as oversized

Unusual shipments will not be accepted for transportation unless advance arrangements have previously been made. Shipments requiring special devices for safe handling will be accepted only when such special devices are provided and operated by and at the risk of the consignor and/or Consignee.

F.     HAZARDOUS MATERIALS: Hazardous materials are acceptable for carriage only under the conditions set forth and permitted by and in accordance with the U.S. Code of Federal Regulations, Part 49, 171-177, issued by the U.S. Department of Transportation, or IATA Regulations whichever is most comprehensive at the time and date of shipment.

NOTE: A number of acids, chemicals, plastic products and similar materials, although acceptable for carriage because of their content, are consigned under trade or technical names similar to names and items prohibited for carriage. Documents covering such consignments, including Air Waybill, must contain a description of the chemical contents of the article(s) consigned. Such shipments which meet the requirements as states herein, will be accepted for carriage provided that the Shipper:

1.     makes advance arrangements with the Carrier; and 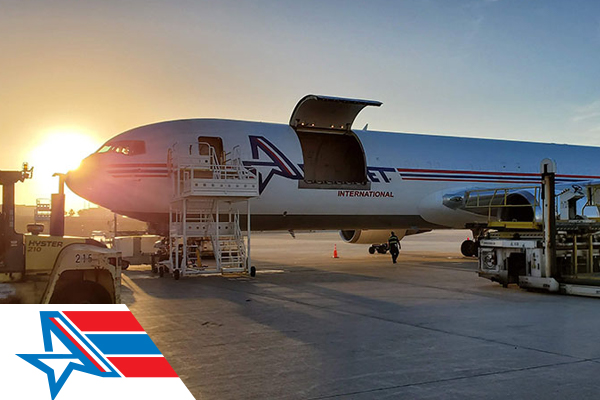 Glittering like a jewel deep in the Caribbean, Trinidad and Tobago is a nation overflowing with diverse life, culture, industry, and a demand for air cargo. Since 1990, Amerijet has offered the archipelago a gateway to the world, and to the global economy. With a unique connection to Houston for oilfield supplies, and to Suriname […]

Amerijet International Airline’s Miami warehouse facility is a central part of its cargo operation. The strategically organized 360,000-square-foot facility is under 24-hour surveillance, and integrated with SmartKargo, Amerijet’s cloud-based cargo management solution. The airline has made significant investments in integrating and updating warehouse management technology to increase handling efficiency. This integration maximizes shipment transparency and […]

In early November, the U.S. cargo airline Amerijet International signed a representation agreement with international air cargo company Strike Aviation. Strike Aviation has been operating in Poland since 2013, with its headquarters in Warsaw and an additional office in Krakow. The company also has a presence in Latvia, Lithuania, and Estonia. The new contract will offer Amerijet’s […]